I’m not sure if around here polocrosse is a sport or a contagious condition.

When we hired Meghan, she had been a summer camp riding director and owned a horse, a saddle, a trailer and a diesel truck. And a dog that looks like a poodle. 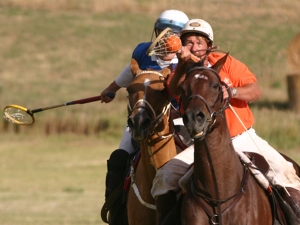 Intense game! Jeep has his eyes on the ball, and staying on the horse is just second nature. Believe it or not, the ponies get into the game just as much!

She was a barrel racer, and had never done English jumping or played polocrosse, but there are active polocrosse clubs around here, including at Camp Stewart, and it wasn’t long before she joined in.

One thing Meghan does not lack is enthusiasm. Nonchalance is not in her vocabulary. So before you know it, the camp polocrosse class that meets every-other day before breakfast is gaining players by the day, and The Heart is even up to playing matches at Stewart! It had been a long time since we had that kind of interest in the activity.

And now she has campers returning to Hunt in September and October to participate in “playdates” which are practice matches, and watch and play in the national tournament, which will be held here in Hunt. There are four Heart girls and two Stewart boys on our junior level team.

I for one love to pop open the back of the Flex and perch in the shade of the hatchback and watch the matches. The riders are amazing, but the truest athletes are the ponies. So beautiful! The concessions are delish, and crowd laidback, and the admission is free. What’s not to love about that? And this weekend I’ll have the added bonus of getting to visit with Heart camp families.