I have finally settled back into the office after a very busy February. February kept me out on the road looking for the best of the best to come be counselors this summer at Heart O’ the Hills. One of the most exciting trips I went on was to the United Kingdom! Wow, what an adventure that was!

For me, the trip started out kind of rocky, with the airline losing my luggage between Charlotte,

Meeting up with Morgan Francis for lunch at the Hard Rock Cafe in New York.

North Carolina and New York. I was one very stressed girl when this happened! Luckily everyone I talked to with the airline was super helpful and my luggage was found a little under 24 hours later. Jeb and I then went to Times Square and met up with Morgan Francis for lunch at the Hard Rock Cafe before heading back to the airport. With my luggage found, it was time to board our flight for Edinburgh, Scotland at 7:40 pm.

We arrived in Edinburgh at 7:30 am. Arriving in Scotland felt like a magical experience to me! It was my first time to set foot on foreign soil. When we arrived at the airport a Camp America representative was there to meet us and show us to our shuttle that would take us to our hotel. We stayed at the Radisson Blu on the Royal Mile, and it looked like a castle to me! Because it was so early in the morning our rooms were not ready yet so we enjoyed a nice breakfast in the hotel restaurant. The best part was drinking the hot tea. I never thought I would be a fan of hot tea. After all, tea is supposed to be cold and sweet, but I very much enjoyed drinking hot tea while I was in the UK.

Our hotel the Radisson Blu in Edinburgh on the Royal Mile.

After breakfast we decided to walk up and down the Royal Mile while we waited for our rooms to be ready. I was very excited to exchange my money and pay with pounds for the first time! Within 10 minutes of walking around it start to rain on us. This is when we discovered that we should never leave the hotel without our umbrellas!

Meeting Lindy for lunch in Edinburgh.

For lunch we met up with former Heart camper, heart LITe and counselor Lindy Perez Alvarez. After lunch Lindy showed us around Edinburgh. One of my favorite stops was the Palace of Holyroodhouse where the Queen stays during one week of the summer when she comes to arrange official engagements and ceremonies.

After touring the palace we decided to stop back by the hotel to grab a couple of things. When I walked into the lobby, I got the best surprise! Emma and Rachael Moran were at the front desk checking in to our hotel! They were staying in the same hotel we were for the length of our stay in Edinburgh so that they could hang out, tour around, and help us recruit counselors at the fair.

Once we got Emma and Rachael settled into their rooms we all went to the Elephant House Cafe to meet up with Carrie Mcnab and her daughter for tea. The Elephant House Cafe is where JK Rowling started writing the Harry Potter books. It was so nice to meet Heart girls from all over the world and sit and talk about how special Heart O’ the Hills is.

Heart girls meeting for a cup of tea at the Elephant House Cafe.

Later that night, we went on a ghost tour of Edinburgh that took us down to the vaults under the city. While down in the vaults we listened to all sorts of stories from Edinburgh’s past. Once we finished the ghost tour it was time for bed at the end of a very long first day in Scotland!

On the second day we woke up early enough to enjoy the great breakfast in our hotel. It was very 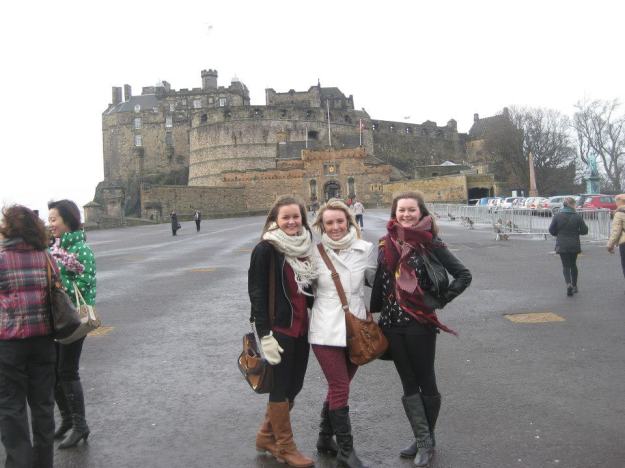 fun to see the difference in the way we prepare food. I quite enjoyed the food over there. After our bellies were nice and full, we started the walk up the Royal Mile towards Edinburgh Castle. I was so excited to tour the castle because I had never been to a castle before (unless you count Cinderella’s castle at Disney World… which I think I might!). I absolutely loved the castle and hearing about some of the history of Scotland. One of my favorite parts was seeing the Crown Jewels of Scotland. It was very fun to have Emma and Rachael along as well.

After the castle we stopped for a nice lunch at little cafe along the Royal Mile where we met up with Conor Murray, a Camp Stewart counselor. We had a wonderful lunch and enjoyed catching up with each other, as well as warming up from our cold tour of the castle! Once we were finished with lunch we enjoyed doing some more touring and sightseeing around Edinburgh!

That night was the Camp America welcome reception. For dinner, I tried haggis for the first time. It wasn’t bad, but not really my cup of tea. It was very fun meeting all of the other camp directors that were there for the fair from all over the United States. Having dinner with previous Heart and Stewart counselors was also very wonderful. Catching up and hanging out was a great way to spend the evening! 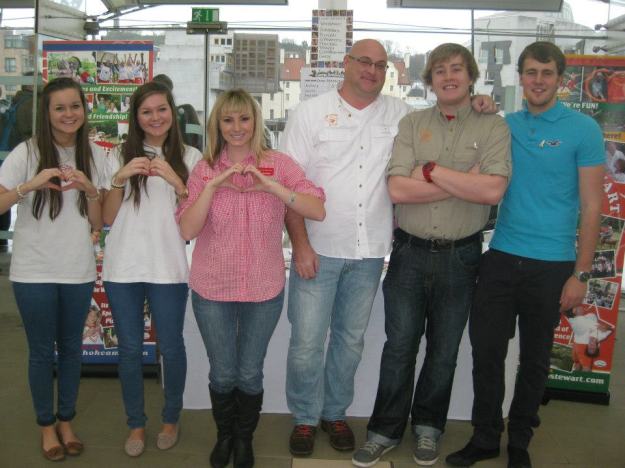 Rachael and Emma Moran, Conor Murray, and David Black helping Jeb and I recruit at the Edinburgh fair.

international camp counselors. I felt like a judge on American idol. When the charter bus pulled up to the building the fair was being held in, we saw a huge queue of about 2,000 potential counselors. We all got off the bus and headed to the building to start setting up our tables. It was crazy to think that all of those people were there to see us!

The Fair went wonderful! We had a lot of help from former Heart and Stewart counselors to help us find the best of the best at the fair! I ended up hiring 5 girls by the end of the fair. Three of the girls are going to be horseback counselors, one is going to teach swimming, and the other is going to teach gymnastics. I am very excited that they will be a part of our Heart family this summer. 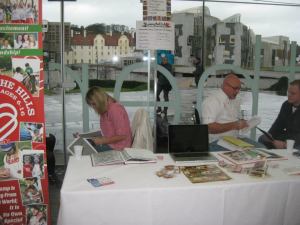 Jeb and I hard at work interview potential counselors.

Edinburgh was so much fun and I really enjoyed my time there. It was a beautiful city and everyone was so nice and friendly! I can’t wait to go back next year!

Beautiful shot of Edinburgh from the castle.