Two weeks ago I traveled the UK to hunt for some amazing counselors on the Camp America UK recruitment week! As an international counselor myself I know how the applicants feel as fair day approaches, with their application in hand and dreams of a summer similar to ‘The Parent Trap’ (seriously it’s the only thing we have to compare it to over here), all they want is to find the camp right for them. And boy, did I have one successful trip!

I began my journey on Monday afternoon, taking the hour train journey through from Glasgow to Edinburgh. Whilst for y’all this journey can be a daily occurrence for either school or work, that kinda journey is something we Brits don’t do all too often! Pretty soon after arriving in the Scottish capital I was joined by Amy Park. You can imagine how excited we were to see each other as the last time we met was in August after camp, so the night was filled with camp stories and catching up before we headed back to the hotel where we met with Camp Stewart’s Program Director, Conor Murray and caught up with him. Two Scottish PD’s – how neat!

Myself and Amy ready for all those applicants outside!

The Edinburgh fair was a blast! Along with Amy, I had help in the form of last year’s counselors, Eilidh Cole and Thalia Renucci, who I can gladly say are both returning again this year! The girls helped me find some incredible applicants and I ended up hiring five counselors and a videographer.  I can’t wait for y’all to meet them. Following the fair we joined Conor and the Stewart counselors for dinner which was a lovely way to end our time in Edinburgh!

The next day we made our way via coach (bus) down to Manchester (four hours this time, which is pretty much a vacation destination in the UK) where that night we were given the opportunity to meet with other camp directors. We got to know some incredible directors from a couple of camps over on the East Coast, people who I will most definitely keep in contact with – camp people are amazing!

The Manchester fair was held in Old Trafford, we were able to go out to have a look at the pitch and grounds before the fair which was really cool. Eilidh very kindly volunteered to come down for the fair and so with her help I hired more incredible counselors with skill sets in pottery, waterfront and photography. That night we dined with the Stewart counselors, and caught up on all things camp.

Following our trip to Manchester we experienced what I would call a ‘mad dash’ to the station to catch our train down to London (it was an experience similar to the airport run in Home Alone). Thankfully all the directors made it on board and unlike Home Alone no one was left behind. Conor and I found ourselves in first class along with a couple of directors from a camp in New York, so you can imagine how pleasant that journey was!

The short time we did have in London was spent trying to see as many sights as possible; luckily Conor was a bit more clued up on the locations of attractions than I, so in a couple of hours we were able to take in Westminster, Downing Street, Trafalgar Square, Leicester Square and Piccadilly Circus. Phew! Needless to say I slept like a baby that night.

The London fair was by far the biggest, with over 3000 applicants coming through the doors! I’d love to say I spoke to every single one of them but alas, time didn’t allow that. But with the help of last year’s counselors Sophie Candlin and Cara Moate I hired another four counselors, one of whom has some experience in Quidditch, so watch this space campers! In other exciting news, Cara is also returning to camp as one of our photographers!

Recruiting in London with Cara and Sophie

So all in all the week was a resounding success, I am so thrilled with everyone I hired and I cannot wait for you to meet them yourselves. I have every faith in their ability to make your campers’ summer the most amazing one yet.  I’m now back home in Glasgow and therefore back to school (roll on May!) and recruiting via Skype but stay tuned for all sorts of fun news in the next few weeks! 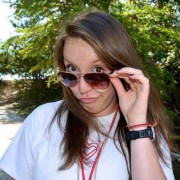 Program Director at Heart O' the Hills. Born and bred in Scotland. Sometimes incomprehensible when faced with exciting situations.