The story of Enamel Crown, who led The Tooth Fairy to Heart O’ the Hills

I stretched my wings and opened my eyes to see my twin brother, Dentin, showering me in way too much fairy dust for this early in the morning.

“The Tooth Fairy is home early! She’s assigning us today!” He practically sang, the shark tooth necklace he’d gotten for his 12th birthday bouncing up and down on his neck.

I had been waiting for this day my whole life: the day The Tooth Fairy would assign all twelve-year-old fairies the family we would spy on for our teenage years. The day we would stop having to stack teeth for the castle walls, spread our wings, and fly for real, out in the world. And finally, the day The Tooth Fairy would notice how hard I’d worked to perfect my flying, my hiding, my, well, everything, and assign me a family with tons of four to seven year old kids.

Mom and Dad had made us a big breakfast- well, big for fairies- and put out our best clothes. We had to look grown up, because being a spy is a grown up job. If you don’t do it well, The Tooth Fairy won’t know if a child has lost their tooth. If you don’t pay attention, even for just an instant, the entire Tooth Fairy system is ruined.

The Tooth Fairy walked slowly onto the stage in a cloud of dust. Her wings shone in the early sunlight, reflected off the castle. She began calling my classmates up to the front and giving them the slips of paper that would determine their fates for the next six years.

“Dentin Crown,” She called, and I hugged Dentin tight before sending him up to the front.

“Enamel Crown,” She said in the same tone.

It was crazy hearing The Tooth Fairy say my name, even if it was my full name that’s only used when I’m in trouble. I shook her hand, grabbed my slip, and ran to meet Dentin. We always knew we would open them together.

Dentin opened his and immediately lifted up into the air.

I read mine again.

I grabbed Dentin’s arm and ran towards The Tooth Fairy, who was sashaying up the stairs.

“Excuse me miss… uh… your highness?” I called out to her.

She took the sheet out of my hands, and then pulled a giant gold-embossed book from her bag. She flipped through it.

“According to my records, Jillian Jennings still has one more tooth to lose,” She said, “and once you have notified me that she has lost it, you will come back here to help with chores around the castle.”

“But!” I said, and Dentin put his hand on my shoulder. No one argues with The Tooth Fairy.

“This is final,” She said, “You, Enamel, were named for the part of the tooth that holds all the other parts together. You will be a great help around here.”

Before we flew off, Dentin took his shark tooth necklace off and put it around my neck.

I couldn’t help but think that he would be the one to forget me, with all those kids losing all those teeth. I flew slowly to the Jennings’ house.

When I got there, I slipped right into the air vent in Jillian’s room, just as we practiced in class. Right away, I could see her. Jillian was alone in her pajamas, holding a bowl with beads in it, some green and some blue.

“Charlotte!” She called, and I looked at my paper. Charlotte was her thirteen-year-old sister. “Can we do another bead drawing? Please?”

“Not now!” a voice called back, “Mia and I are practicing war canoe.”

“Lila?” Jillian opened the door and yelled out, “Will you do a bead drawing with me?”

“I’m practicing my chieftain speech!” another voice called back, “And you know you’re not allowed to go to camp until you lose all your teeth!”

Teeth! A buzzword! I watched Jillian try to wiggle her tooth, but from what I learned in school, she wasn’t going to lose it anytime soon. She gave up wiggling and carefully placed the bowl on her dresser. She closed her eyes, put one hand in the bowl, and picked out a blue bead. She smiled. She did it again, and picked a green one this time. I wondered what kind of game this was. With the green and the blue bead held tight in her fist, Jillian turned out her light and went to sleep.

The next morning, there was a lot of movement in the Jennings house. I followed Jillian out to the front porch, where three trunks, two green and one blue, sat in the trunk of the car.

“We’re going to miss you, Jilly bean,” Lila said, scooping Jillian up into a hug.

As Lila got into the driver’s seat, Mia and Charlotte gave Jillian hugs too. Just as their doors closed, Jillian opened the trunk a sliver, and jumped into the car. I darted after her, just making it. I was under no circumstances allowed to leave my assigned household, but I was also not allowed to be out of sight of my assigned children. I only had one tooth to worry about and I was already messing it up.

After a very, very long time in the car, I heard a lot of screaming. Or maybe it was singing. The car stopped, and the trunk door opened.

“Jillian! What are you doing here?” Lila said. She did not sound happy.

“I just couldn’t stay at home again this year,” Jillian said, and started to cry.

Lila, Mia, and Charlotte all stared wide-eyed at her.

“You know you’re going to have to go home, right?” Lila said, “No one is allowed to go to camp until they lose all their teeth. The Tooth Fairy will never be able to find you here.”

Those words hurt. A child that doesn’t care about The Tooth Fairy? And I had to be stuck with her? I followed them to an office where they talked to some adult people, but I didn’t pay attention. I had already messed up too many things for it to be worth trying. I squeezed Dentin’s shark tooth necklace.

When the meetings were finished, Jillian was crying even harder. I had to fly extra fast above her as she sprinted back towards Lila’s car. As she ran across the grass, she pulled the blue and green beads out of her pocket, and threw them as hard as she could. But just as she let them go, she slipped, her feet flying out from behind her. If only I could catch her!

The next few minutes were a blur. Jillian screamed, there was blood, and an older woman picked her up. I followed them into a small room with white walls.

“You knocked your tooth out!” The woman said.

Tooth! The ultimate buzzword! Jillian stopped crying. I froze. Jillian had lost her tooth, and I had no idea how to get back up to the castle. I had memorized the directions from Jillian’s house, but not from here! There was no way I could notify The Tooth Fairy. I flew out of the room and looked up, but I was right. There was no way I could find my way back to the castle in time. Not now, and maybe not ever.

I held back tears and flew into the room. Jillian smiled a big but bloody smile and put her tooth under the pillow when the older woman wasn’t looking. Then, she closed her eyes and fell asleep. I had to think fast. I took out my notepad, and wrote Jillian a note. I sprinkled some fairy dust inside, but that wouldn’t be enough. What else did I have? My dress, my shoes, and Dentin’s shark tooth necklace. The only part I had left of Dentin, I thought, who I might never see again. Slowly, I took it off and laid it under Jillian’s pillow. Then, for the first time that whole week, I flew into the air vent and let my eyes close.

I was woken up by cheers.

Ten or so girls a little bit older than Jillian crowded around.

“We have to get the camp director,” The nurse said, “The Tooth Fairy has never come here before. This means that six and seven year olds could be allowed at camp!”

More cheers. I covered my ears, but took my hands off when I realized they were cheering for me. Girls of all ages, began to crowd the room,Lila, Mia, and Charlotte among them. They were all talking to Jillian and passing the note around. Jillian was beaming and had Dentin’s necklace safely in her fist.

It was then that I realized that Jillian felt the same way about going to camp with her sisters that I felt about being a big-time spy. I realized that this camp was a different kind of family, a family that needed their own fairy spy just as any other family did. I knew that once I found my way to the castle, I would come back here and I would be that spy.

Before I set off on my long journey home, I took one last look around the room. The girls were still there and singing, Jillian loudest of all of them. But what caught my eye was a poster, a picture of a giant tooth. I flew closer. It had all the parts labeled.

The Dentin, it said, supports the Enamel. It is filled with nerve fibers that help the Enamel when something is wrong.

I flew out the door and looked up at the sky. It didn’t look so scary anymore. I was ready to fly home.

Editors note: Rebecca Bendheim is a Heart O’ the Hills phenomenon. From her young days as a camper, to Shawnee Chieftain, HeartLITe, and previous Shawnee Sponsor she has always been true to HOH. Her amazing imagination and writing skills have greatly been used for The Heart Beat, the camp paper, and she has beautifully taught Journalism and Storytelling to your girls over the summers. Rebecca is a student at Vanderbilt who also works for this Delaney Park Dental service, and we are beyond excited to have shared her talents with you!

How does The Tooth Fairy find us at camp? was last modified: January 6th, 2019 by Fallon Parnell 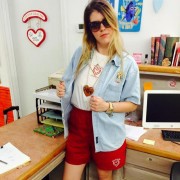